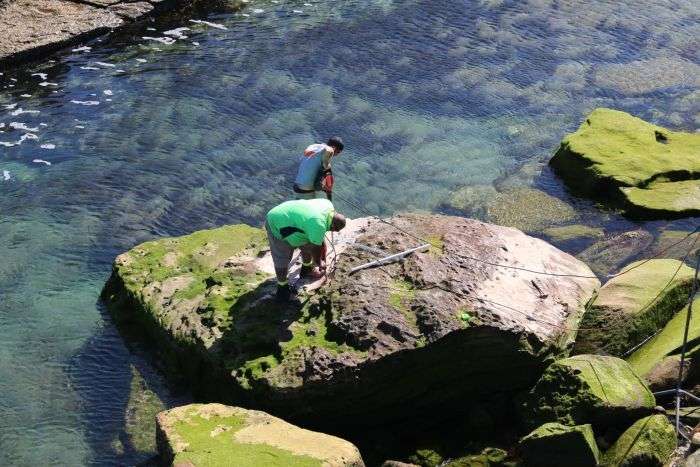 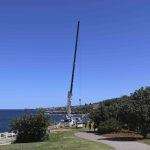 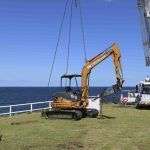 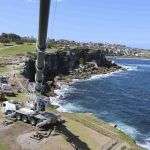 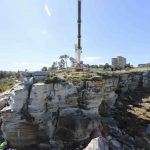 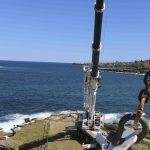 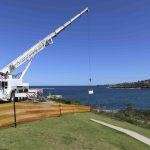 A huge sandstone rock weighing as much as a humpback whale is being moved from the Giles Baths at Coogee in a week-long operation, after it shifted 50 metres in wild weather earlier this year.

The 30-tonne rock was moved by wild swell to the middle of the baths during a massive storm over Sydney in June which also caused extensive damage to the Coogee Surf Life Saving Club.

Locals who inspected the damage in the days following the storm say they would never have expected the huge rock could be moved by waves.

“It was amazing to see after the storm. I didn’t believe the huge rock actually moved,” one local said.

“When we went down there after the nor’easter [north-eastern storm]. It was all pushed in.”

The Randwick Council is responsible for maintaining the baths and the job of moving it back has proved to be more tricky than they expected.

Excavators had to be lifted down to the baths to break up the sandstone.

Todd Clarke from Randwick City Council said they thought of blowing up the rock and trying to float it out to sea.

“We tried a whole array of options,” he said. “We tried helicopters, barges, tugboat but no-one could efficiently or safely commit to moving something that size.”

Removal will take up to a week

The men working on site need perfect conditions — the tide has to be out and the wind cannot be too strong. The whole exercise will take place over the next week.

Sedimentary geologist Professor Greg Skilbeck said the reason this sort of sandstone cracked and broke off was because of compression on the way to the Earth’s surface.

“These rocks have been buried to depths of two to three kilometres previously before uplifting back to the surface,” he said. “The burial means they get squashed and when they come back to the surface, they expand to re-equilibrate to surface pressures. This expansion produces cracks in the rocks (called joints) which can eventually break the rock apart and it will fall off.”

“If you walk along any of the cliffs around Sydney, you will see such blocks at the bottom of pretty much all of the cliffs. One of the main joint orientations is approximately vertical and parallel to the coast, which is why we get vertical shear cliffs.”

The Randwick City Council is expecting to re-open the baths in time for summer.

View us in Maps