Fullers’ award-winning service has been recognised across Sydney and greater NSW.

Fullers Mobile Cranes is proud to announce our registration with Supply Nation on Indigenous Business Direct. As a proudly Indigenous company, we are humbled to be included on Supply Nation’s Directory. 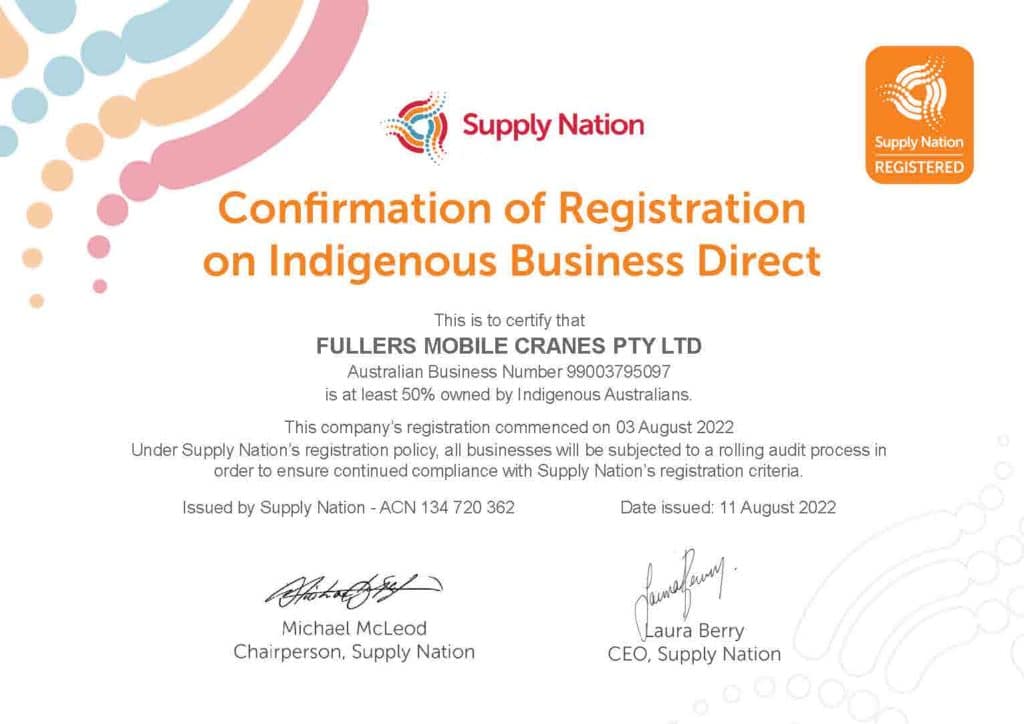 On the 18th March, the Crane Industry Council of Australia hosted an Industry Conference in NSW with the theme, ‘Elevating Expectations’.

The conference gave time to reflect on how the industry has been shaped by internal initiatives and external forces, and highlighted the way in which the crane industry has redesigned its processes to increase safety and demonstrate best practices.

General Manager, Kane Fuller, was thrilled to take part in the event and present to a room full of industry representatives from across the sector including construction companies, policymakers, government departments, crane owners and researchers.

Kane shared the detailed behind the scenes planning and execution of an advanced lift performed by Fullers Mobile Cranes to install an overpass bridge. The sector also heard Kane talk about the evolution of the company since its inception in 1989, and with this, the evolution of the company’s lift planning processes. Kane highlighted Fullers commitment to clear and open communication when working with clients and attributes this as a major factor to the company’s successful and safe operation in the industry.

Fullers Mobile Cranes has won the Parramatta Local Business Award for 2019! Massive thanks to all of the team for making this possible!

Crane Industry Council of Australia Lift of the Year Award 2011

Fullers Mobile Cranes picked up the Winner for the Crane Industry Council of Australia’s Lift of the Year Awards in 2011.

Trainee of the Year Award 2019

Fullers Mobile Cranes would like to congratulate our young trainee, Christopher Hull, on winning the 2019 Trainee of the Year Award!

Fullers Mobile Cranes has recently been featured in the latest edition of the Cranes & Lifting Magazine.

View us in Maps